A 1918 oil discovery on a small farm along the Red River in Texas launched a drilling boom that would bring prosperity — and inspire a Hollywood movie starring Clark Gable, who was a teenager working in nearby Oklahoma oilfields.

On July 29, 1918, a wildcat well drilled by the Fowler Farm Oil Company revealed an oilfield beneath the small cotton-farming town of Burkburnett in North Texas. The subsequent exploration and production frenzy arrived two decades before “Boom Town,” the popular 1940 MGM movie it inspired.

The Fowler No. 1 well was completed at the northeastern edge of Burkburnett, which had been founded in 1907. The town (once called Nesterville), had been renamed by President Theodore Roosevelt, who had hunted wolf along the Red River with prominent local rancher Burk Burnett.

Although Wichita County had been producing oil since 1912 (thanks to a shallow water well discovery west of town), Fowler’s decision to drill a well on his farm – an attempt called “Fowler’s Folly” by some – brought hundreds of petroleum companies to Wichita County. Fifty-six drilling rigs were at work just three weeks after the original oil strike at a depth of 1,734 feet. By January 1919, the Burkburnett population had swelled to 8,000 people – and a line of derricks two-miles long greeted new arrivals. 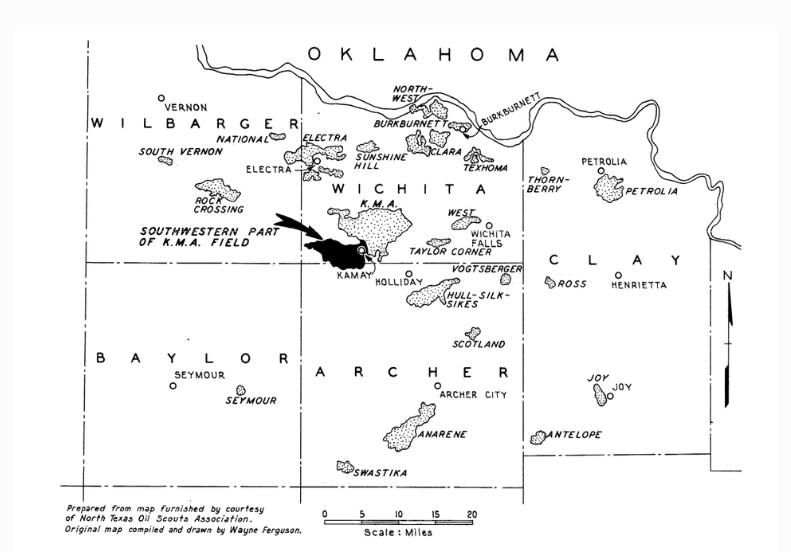 The Burkburnett oilfield joined earlier discoveries in nearby Electra (1911 – known as the “Pump Jack Capital of Texas”) and Ranger (1917) that helped make North Texas a worldwide leader in petroleum production. By the end of 1918, Burkburnett oil wells were producing 7,500 barrels per day. By June 1919, there were more than 850 producing wells in “the world’s wonder oilfield.”

Nineteen local refineries were soon processing the crude oil. The town’s unpaved streets were lined with newly formed stock offices, brokerage houses, and autos stuck in the mud. Twenty trains ran daily between Burkburnett and nearby Wichita Falls. Yet another highly productive Wichita County oilfield was then discovered, bringing more prosperity for North Texas. But eventually, the oil boom died out. Affected by the Great Depression, Burkburnett’s population declined during the 1930s. By 1939, the town had a population of less than 3,500.

At the same time, the movie “Boom Town” was adapted from a Cosmopolitan magazine article, “A Lady Comes to Burkburnett.” The 1940 MGM feature starred Spencer Tracy and Clark Gable, Hedy Lamarr and Claudette Colbert. It was nominated for two Academy Awards. At the time of the 1918 Burkburnett discovery well, Clark Gable was a 17-year-old roustabout working with his father William Gable, a service contractor, in an oilfield outside Bigheart, Oklahoma. In 1922, Gable would collect an inheritance from his grandfather and leave working in the Oklahoma oil patch for good. His father was reported to have said, “I told the stubborn mule if he left me this time, he need never come back.”

Today, Burkburnett’s population exceeds 10,000, thanks to agriculture, continued production from its historic oilfield – and the 1941 establishment of nearby Sheppard Air Force Base.

Oil wasn’t news to the titans of industry in the big cities of the northeast. Until the Texas explosion, John D. Rockefeller and his Standard Oil Company of Pennsylvania had an unchallenged monopoly on America’s oil and gas supply. But with significant oil strikes in Corsicana in 1894 and Spindletop’s explosion in 1901, independent oil contractors called wildcatters soon stalked the Texas frontier looking for big bucks and big opportunities in the bubbling ground. Thousands of inexperienced farmers, called boll weevils by seasoned oil workers, left their tractors and poured into boomtowns. Once they learned to sling heavy cables and pipes on the derrick floor, the farmers became oilmen and graduated to roughneck status.

Rough was the right word for life in a boomtown.

Sometimes no town existed at all near a newly-tapped oil field, so corrugated iron shanty towns popped up quickly to serve the thousands of people streaming in. Managers of flimsy boarding houses along the dirt ruts of “Main Street” charged exhausted riggers almost half a day’s pay to rent a cot for twelve hours. Enterprising restaurateurs built fires under 6-foot vats, filled them with water and dried beans, and charged oil hands 15 cents for a cup of “soup.” Gas hung in the air for miles around an oil town. It was nauseating when you could smell it and dangerous when you couldn’t.  Gas blindness or even gas-induced death was a daily gamble for workers on the seeping rigs. There was also no shortage of gambling and fisticuffs in the ratty saloons. Things got so bad in one Texas boom town that Governor Moody sent the Texas Rangers to settle things down.  Safe drinking water was nowhere and dysentery was everywhere. In short, a boomtown wasn’t a healthy place to call home for very long.

The Legacy of Black Gold Lives On

The Texas oil boom continued its frenzied pace throughout the early 1900s. The impact of all that black gold changed both the state and the nation.

Boomtowns sprang up and derricks rose leg-to-leg on any patch of Texas landscape where oil looked possible. In 1923, the Santa Rita No. 1 oil pump – named for the patron saint of the impossible, St. Rita – blew in from the unlikely ground of the Permian Basin. The state’s Permanent University Fund and the University of Texas and Texas A&M have been blessed from those royalties ever since. In 1932, Governor Ross Sterling extended the authority of the Texas Railroad Commission to establish some regulatory order to the wildly expanding oil industry. Throughout the 1930s, big oilmen like Roy Cullen, H. L. Hunt, Clint Murchison, and Sid Richardson made big oil money and even bigger contributions to Texas’s cultural, scientific, and educational heritage.

By the 1950s, the heyday of the Texas oil boom was drawing to a close. Reduced but steady production of a wide range of petroleum products replaced the spectacular eruptions of the black gold days. In the early 2000s, Texas experienced a second oil boom – natural gas. With new drilling technologies and practices came vast reserves of untapped natural resources, big potential for big money, and a new word for our state’s political, economic, environmental, and public health conversations: fracking.

The Texas oil legacy lives on, as do the discussions and arguments about it. The reality of Texas oil is that it is still a major component of the national economy. Roughnecks still sling cables and pipes on the big rigs. The smell of oil still hangs in the Texas coastal air. And a wildcatter somewhere continues to search the earth for black gold, still certain that there’s something down there.

Please take a look at our latest technical animation work! You’ll see that our creative team is continuing to push beyond their comfort zone to create that “WOW” experience for every client’s play, tool or oil and gas technology project with our animated graphics. Need to explain enhanced oil recovery, stacked pay or oil investments in unconventional oil?  No problem. Our seasoned technical animator team specialize in process, mechanical and industrial animations as seen in our animation demo reel.

With new effects and cutting-edge, 3D modeling software, we can go beyond the norm and create that one of a kind technical animation, illustration, or oil and gas graphic animation you’re looking for!  These 3D oil and gas graphics are from many projects we have created up to this point. Look, experience and…

Let us know what we can do for you!