“CCS is an important component in the broad portfolio of approaches and technologies that will be needed if climate change is to be successfully addressed.”    – US DEPT of ENERGY

Discounted, Pre-Launch Price of $2500 for an Unlimited Time Usage License

What is carbon sequestration? 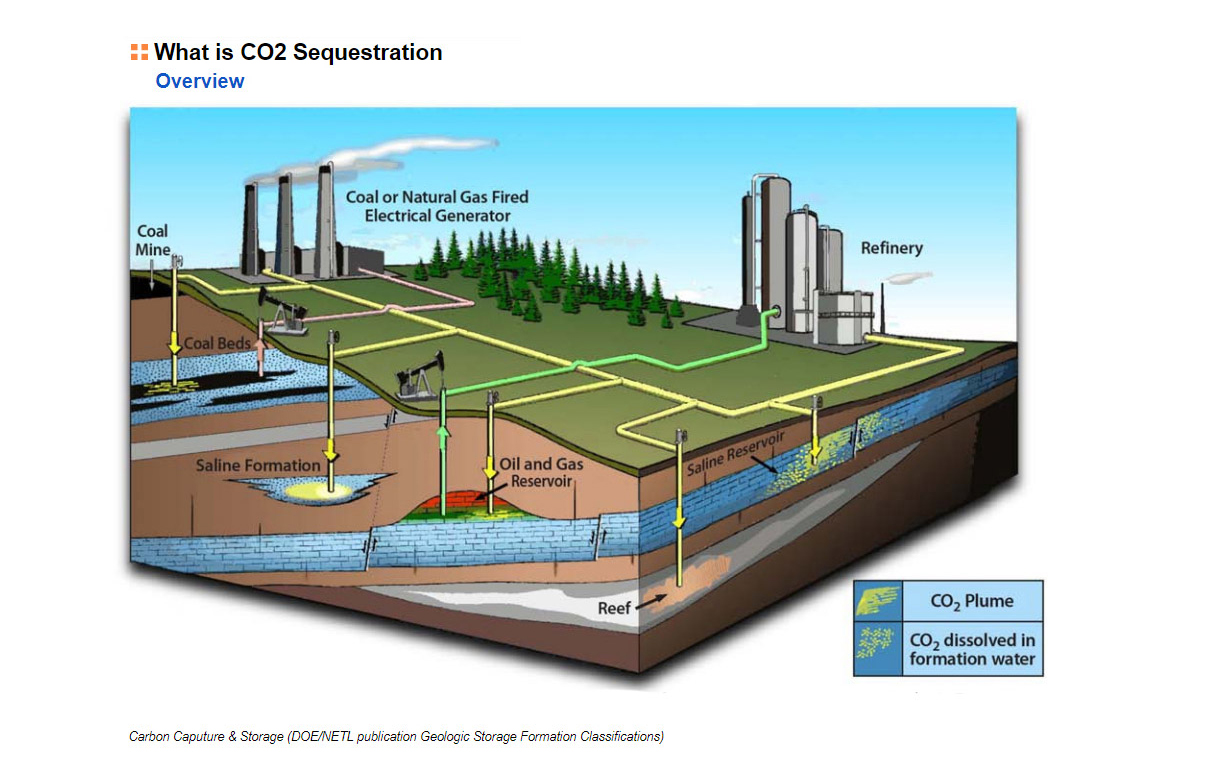 What is carbon sequestration?

How does carbon get into the atmosphere?

How much carbon dioxide does the United States and the World emit each year from energy sources?

Has the USGS made any Biologic Carbon Sequestration assessments?

The USGS is congressionally mandated (2007 Energy Independence and Security Act) to conduct a comprehensive national assessment of storage and flux (flow) of carbon and the fluxes of other greenhouse gases (including carbon dioxide) in ecosystems.

At this writing, reports have been completed for Alaska, the Eastern U.S., the Great Plains, and the Western U.S.

Which area is the best for geologic carbon sequestration?

It is difficult to characterize one area as “the best” for carbon sequestration because the answer depends on the question: best for what? However, the area of the assessment with the most storage potential for carbon dioxide is the Coastal Plains region, which includes coastal basins from Texas to Georgia. That region accounts for 2,000 metric gigatons, or 65 percent, of the storage potential.  Other areas with significant storage capacity include Alaska and the Rocky Mountains-Northern Great Plains.

What’s the difference between geologic and biologic carbon sequestration?

Geologic carbon sequestration is the process of storing carbon dioxide (CO2) in underground geologic formations. The CO2 is usually pressurized until it becomes a liquid, and then it is injected into porous rock formations in geologic basins. This method of carbon storage is also sometimes a part of enhanced oil recovery, otherwise known as tertiary recovery, because it is typically used later in the life of a producing oil well. In enhanced oil recovery, the liquid CO2 is injected into the oil-bearing formation in order to reduce the viscosity of the oil and allow it to flow more easily to the oil well.

Biologic carbon sequestration refers to storage of atmospheric carbon in vegetation, soils, woody products, and aquatic environments. For example, by encouraging the growth of plants—particularly larger plants like trees—advocates of biologic sequestration hope to help remove CO2 from the atmosphere.

How much carbon dioxide can the United States store via geologic sequestration?

Please take a look at our latest technical animation work! You’ll see that our creative team is continuing to push beyond their comfort zone to create that “WOW” experience for every client’s play, tool or oil and gas technology project with our animated graphics. Need to explain enhanced oil recovery, stacked pay or oil investments in unconventional oil?  No problem. Our seasoned technical animator team specialize in process, mechanical and industrial animations as seen in our animation demo reel.

With new effects and cutting-edge, 3D modeling software, we can go beyond the norm and create that one of a kind technical animation, illustration, or oil and gas graphic animation you’re looking for!  These 3D oil and gas graphics are from many projects we have created up to this point. Look, experience and…

Let us know what we can do for you!